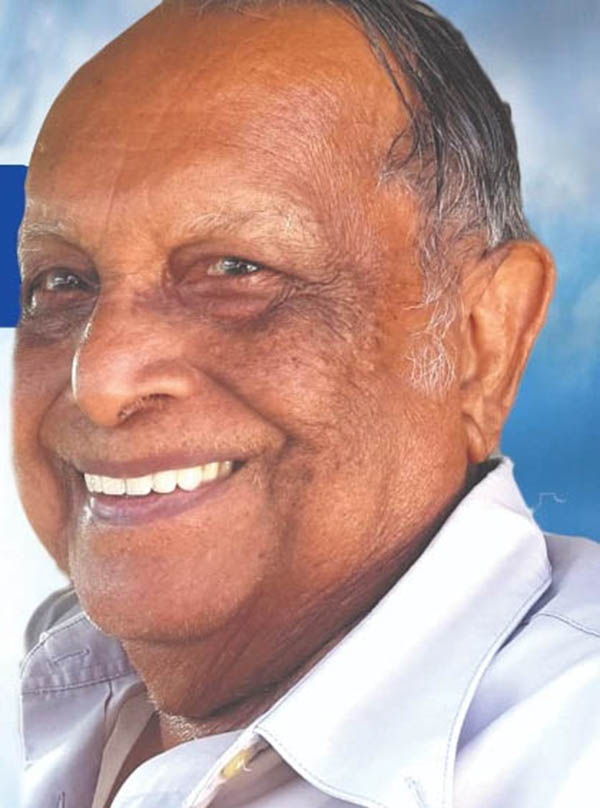 Madho Beepat, the founder of Beepat and Sons, passed away last Friday after losing his battle with cancer.

He was 89 and died in Florida, where he was receiving treatment for his illness.

Beepat, a father of seven, has been described as a pioneer in the local and regional commercial sector who has left a legacy for many young entrepreneur to follow.

His son Roy Beepat, Proprietor of Giftland Mall, yesterday said that his father built his empire from scratch after starting his career as an entrepreneur under the guidance of his uncle Bhaichandeen, who operated a garment factory in Lombard Street and a hardware store.

“Even in his 80s he was a remarkable businessman and kept going to the end. He created business opportunities not only for the Beepat generation but many others. He was a visionary and a pioneer of the business sector in Guyana and should be remembered for his contributions,” he reflected.

“My father was a pioneer, he started under uncle Bhaichandeen selling items on foot and then upgraded to a carrier bicycle to supply orders. He later opened a stall in the Stabroek Market and then built his first store at 95 Regent Street in 1958,” his son said as he pointed out that his father was the second Indo-Guyanese to open a store on Regent Street among European merchants.

According to the younger Beepat, in 1973 his father expanded his enterprise and moved to 101 Regent Street, where the operation remains today serving the needs of thousands of Guyanese.

Beepat said when his father decided to move to St. Lucia in 1978, he took his skills with him and established a garment and windows factory, Beesons Window and Doors, and later expanded the window manufacturing enterprise to Grenada and Guyana. The company provides the widest range of windows, doors and shop fronts with customized glass and mirror on the Caribbean market.

Upon his return to Guyana at the age of 82, the elder Beepat made investments in a bathroom tissue factory and opened the Guyana branch of Beesons Windows and Doors.

Meanwhile, a cousin, Randolph Bhaichandeen, told Stabroek News that the elder Beepat had always been close to his family. He remembered his “desire for perfection.”

“His name is associated with the word pioneer because he was among the first to enter into the aluminum business and this was way before the Chinese entered the market. His life story and success is remarkable as he single-handedly built his empire,” the cousin recalled as he noted that Beepat will be missed.

He pointed out that for his cousin to be able to establish a presence on Regent Street at a time when it was dominated by foreigners is testament to his visionary and pioneering lifestyle.

“Many young entrepreneurs should learn from him and his story because he started from the bottom and made his mark,” Bhaichandeen noted.

Fellow businessman Eddie Boyer said Beepat’s contribution to the business sector has paved the way for many. He noted that the fact he was able to migrate to St. Lucia and created a name for himself in the Caribbean is proof that Guyanese are able to achieve great things.

“He is a business magnate in his own sense and one entrepreneurs should look up to…He was passionate about business and while he has become [a] competitor in the aluminum manufacturing arena, like us, he has brought superior products to the local and Caribbean market,” Boyer pointed out.

He related that the elder Beepat entered the world of business before him and he can vividly remember him using a pencil and a book to calculate a customer’s bill at the Regent Street store.

According to the Beepat website, in November 1953, the elder Beepat, then a young businessman, decided to take a risk and start his own one-man operation in the La Penitence Market. “It was not without challenges, for after the first week, he recalls how he had meagre sales and questioned his ability, and his choice. But, he persevered, and laid the foundation for something he probably did not envision growing to become a present day corporate giant,” it says.

“As M. Beepat developed his business through sales and growing business acumen he saw the opportunity to move his operations to an underdeveloped street known then as a depressed area – Regent Street. In so doing, he encouraged other businessmen and associates to join him, which they did; transforming it and in the process birthing Georgetown and Guyana’s popular business area. This is significant to note, since he pioneered the vibrant business hub that very street has been transformed into,” it adds.

Beepat greatest talent was his ability to spot excellent workers and hiring them.

Mr.  Beepat seems to have worked hard to build his business.  His son from Giftland appears to be very arrogant.

He was always on the lookout at the various markets for excellent sales people to hire.

Oh rant banna, you seem to know everybody an' their aunt. Iman doan know how fo believe you now banna, I hear you us a lieman.

He ah one liNeman, like de loaded pair in a manhole.

Mr.  Beepat seems to have worked hard to build his business.  His son from Giftland appears to be very arrogant.

He has all the right to be. He was proud of his father.

Does anyone of you know if this Beepat guy was an India Indian and not a Guyanese Indian? One of his former employees told Prashad that he and his family were India Indians who came to Guyana for business.

Ramakant-P replied:
I think you mistake me for your Mama.
$M unaccounted for in Region 10 community projects under SLED programme
4 minutes ago

Toronto's Dominion Voting Systems sues Rudy Giuliani for $1.3B US
9 minutes ago