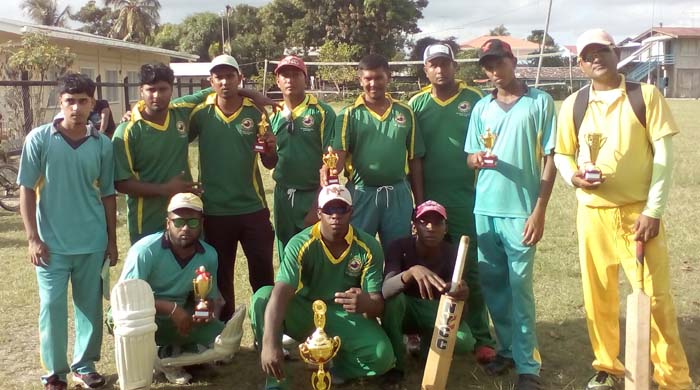 An incisive spell of fast bowling from man-of-the-match Saieef Ally guided Aurora Knightriders a comfortable six-wicket victory over Hibernia Lions which also saw them wrapping up the three-match T20 series 3-0 on Sunday last at the Hibernia Cricket ground.
Played under a blue sky in a party atmosphere, the Lions were invited to bat on a flat track. They put together a respectable 173 all out in 17.3 overs with Skipper Chandrika Gobin leading the way with a well composed 48 (2×4 4×6), Gangabeharry Ramdhanie 30 (2×4 2×6) and Ameer Mohamed 21 (1×4 2×6), the other contributors.
Bowling for the Knightriders, Captain Saieef Ally grabbed 4 for 21, Garfield Phillips 3 for 32, Reshad Ally 2 for 18 and Timore Gafoor had 1 or 16. Chasing a challenging total of 174 to win, Knightriders, already winning the series by talking the first two matches went about another victory in blistering fashion.
They rattled up 174 for 4 in 16.1 overs led by Ravi Beharry with a swashbuckling 72 (8×4 3×6), Quacy Reedon 34 (3×4 2×6), Anand Manniram 25 (2×4 1×6) with Timore Gafoor unbeaten on 15 when victory was achieved.
DovendrTeh wicket takers for the Lions in a losing cause were Mohan with 2 for 27 while Ramdhanie Samaroo and Gangabeharry Ramdhanie took one wicket each. Aurora Knightriders collected the winning trophy while the runner-up trophy went to Hibernia Lions.
Ravi Beharry was awarded the trophy for the batsman with the most runs (188) while Saieef Ally received the trophy for the bowler with the most wickets, 10.

Sign In To Reply
Post
Current Visitors: 115 (3 members, 112 guests)
Welcome to the Original Guyanese Discussion Forums, first established in 1996. Here you can discuss, ask questions or generally debate anything related to politics, movies, music, health or just gyaff away your day/night here. A note of warning, the Political forum is not for the faint of heart.  We do have some rules, so please adhere to them.
Privacy Statement - Rules
Join Now
Village Belle Wow five grandkids,, that was fast, congrats. Now we are tie with grandchildren. Eid Mubarak!
40 minutes ago