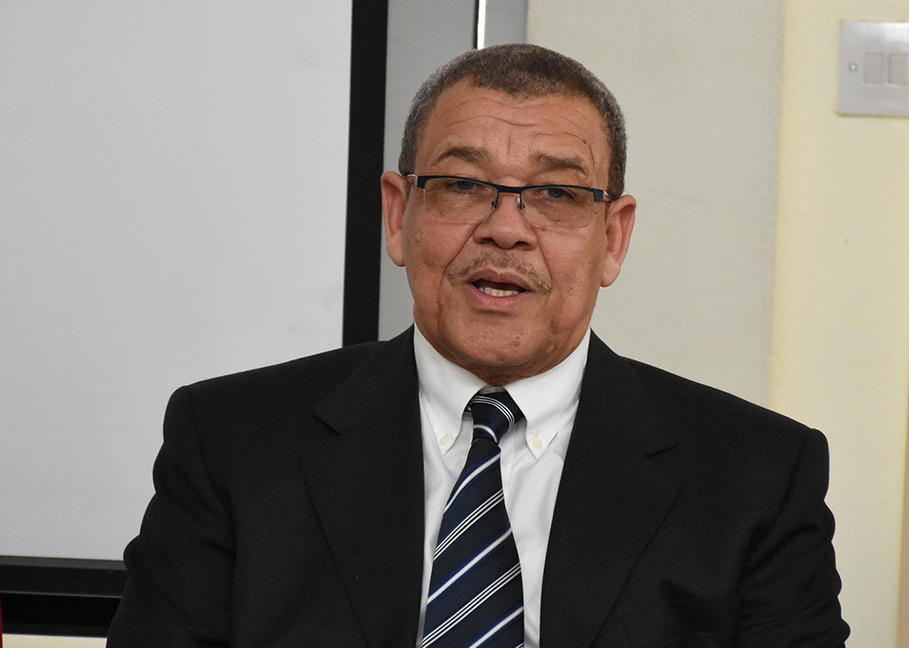 -Statia maintains all transactions above board

As part of its audit of the 2018 operations of the Guyana Revenue Authority (GRA), the Audit Office of Guyana has raised concerns about the disposal of Want of Entry vehicles but Commissioner General (CG) Godfrey Statia has assured that the questions are routine and the procedure used has been above board in every case.

A draft of the audit report, seen by Stabroek News, raises questions about more than 100 vehicles advertised for sale between July 2018 and February 2019. It has been sent to the GRA for a response.

Want of Entry vehicles are those for which no entry taxes have been paid by the importer.

In an invited comment yesterday, Statia noted that his office will respond to each query, while explaining that his cursory examination shows that concerns raised appear to stem from a lack of understanding of the process.

“There seems to be several references to advertised vehicles but there is a claim period of 30 days following advertisement when anyone with a claim can approach the authority to pay sums owed. Persons often come and pay after the ad has been placed,” he explained.

The report references a sealed bid held on the third and fourth of July 2018 during which 28 vehicles were disposed of. The status of six of the vehicles could not be determined while another two had been registered to two government agencies instead of the highest bidders. Additionally, four vehicles were sold to individuals who expressed their interest via letters to the CG.

Another set of 92 vehicles was, according to the audit, published in the Official Gazette on March 31, 2018 but only 13 were disposed of via sealed bids as of this month.

“As such it could not be determined how, when or if the remaining 73 were disposed of by the authority,” it was noted.

In September 71 vehicles were disposed of via sealed bid but the audit office could not determine if 27 of these bidders had honoured their obligation. One vehicles was removed from the warehouse after publication and before sale while one Honda ATV was sold for $161,000 to an individual who did not bid. A sealed bid received for this ATV was for the sum of $285,000.

A further 48 vehicles were advertised in the Gazette on November 10, and of this number two were disposed of via sealed bids, 12 were disposed of by an unknown method other than sealed bids while the status of the remaining 28 was unknown at the time of audit.

Concerns were also raised about 34 vehicles disposed of in February 2019 and there is evidence, according to the Audit Office, that one of the vehicles was not sold to any of the successful bidders and another sold for $400,000, while the highest bid was $1.8 million.

It was also reported that while nine of these vehicles were removed by request of the CG, no documentation to substantiate same was presented.

“Of the 9 vehicles removed two were removed after publication [however] 194 bids were received by intended purchasers resulting in an estimated loss of revenue valued at $14.475M,” the report said.

Concerns about the disposal of Want of Entry and seized vehicles were raised in June by Opposition Leader Bharrat Jagdeo, who claimed that the GRA has seized and disposed of hundreds of luxury vehicles that never made it to the register for Want of Entry, were never auctioned, but were fraudulently transferred and found their way into the hands of people sympathetic to the government or “given to family and friends,” resulting in billions of dollars in lost revenue.

Statia, in responding to the allegations then, characterised such claims as misleading. He said that while he would prefer not to respond to statements made by politicians, the claims made by Jagdeo were “misleading, filled with innuendos and allegations of fraud, create public mischief, and are meant to tarnish the efforts at rebuilding the reputation” of the GRA.

Even as he highlighted that over the years, the revenue netted from the disposal of seized vehicles has increased substantially to the hundreds of millions, Statia had explained that there were generally two categories of vehicles disposed of by the GRA: Want of Entry vehicles and Seized vehicles.

Want of Entry vehicles are disposed of through sealed bids after the said vehicles are placed in the Official Gazette and subsequently advertised if claims were not made during the mandated claim period. Statia observed that sealed bids were introduced in late 2016 for the very reason of collusion and revenue loss.

He said that interested bidders are given the opportunity to examine the assets before submitting the actual bids. The award goes to the highest bidder once the bid is equal or above an amount sufficient to pay all duties, expenses, rent and charge.

However, if the bidder fails to honour his/her obligations as the awardee, the motor vehicles may be re-advertised or the Commissioner-General may dispose of same in accordance with Section 90 (4) of the Customs Act, which provides that “If any goods on being offered for sale as aforesaid cannot be sold for a sum sufficient to pay all duties, expenses, rent and charges, the same may be destroyed, or otherwise disposed of as the Commissioner-General may direct,” the statement said.

“Disposal of Want of Entry or Seizures are done, at all times, in a fair, impartial and transparent manner with the Internal and State Auditors playing their respective roles. Consequently, the GRA welcomes any audit by the Auditor General who audits such transactions on a yearly basis, and report his findings to the Public Accounts Committee,” Statia had declared.

Regarding disposal of seized vehicles, he said that under sections 218 and 224 of the Customs Act, the Commissioner-General may, given the nature of the offence, allow the individual in question to pay a fine in lieu of court proceedings or he may dispose of the seizure as he deems fit accordingly.

Statia pointed out that in some instances, seized or Want of Entry vehicles are disposed of by way of assignment to other state entities such as the Guyana Police Force, the Guyana Prison Service, the Guyana Defence Force, the Ministry of Health and other departments that require resources for effective functioning.

“This has always been the practice and the exercise of such discretion is not unique to Guyana,” he said.

Statia further pointed out that notwithstanding the wide powers given to the Commissioner-General to dispose of seized vehicles as he sees fit, “such disposals are done in a fair and consistent manner to ensure maximum collection of revenues by the state.”

Lots of vehicles being seized in Guyana. Looks like a lot of people trying to evade taxes.

Where are the GNI GRA experts?

They are selling the seize vehicles for peanuts to their friends and family. In Burnham days, he will demand and order who should get your property.

This  caretaker President say, at least give we something.

But I man see some body getting kill/ and or the vehicles will be vandalize , imagine you brought you vehicle in and the bloody government seizing and dispose to there friends and family.

There should be a thorough investigation and any infractions mitigated.  If someone benefited, they should be made to pay the difference.  Rules need to be tightened and the whole disposal process should be outsourced!

They are selling the seize vehicles for peanuts to their friends and family. In Burnham days, he will demand and order who should get your property.

This  caretaker President say, at least give we something.

But I man see some body getting kill/ and or the vehicles will be vandalize , imagine you brought you vehicle in and the bloody government seizing and dispose to there friends and family.

Statia is a bloody soup drinker or is it cool aid??!!

One of the reasons the PNC is not going back to the out house and why the PPP want in on the game. The state is a fat milk cow for these creeps.

ksazma posted
.......Makes me remember someone telling me in 1992 that things were hard because it was not easy bribing when the PPP took over the government.

Hope you din fall for that big fat lie

Sign In To Reply
Post
Manage Topic
Welcome to the Original Guyanese Discussion Forums, first established in 1996. Here you can discuss, ask questions or generally debate anything related to politics, movies, music, health or just gyaff away your day/night here. A note of warning, the Political forum is not for the faint of heart.  We do have some rules, so please adhere to them.
Join Now
Coronavirus now poses “very high” risk at global level -WHO
Speed limit on Linden Highway cut because of soil erosion
Trinidad born rap­per Nic­ki Mi­naj makes donation to St Jude’s Home for Girls
Jamaica: Slain former Reggae Boy hailed
Jamaican security guard kills wife in Trinidad
Jamaica: Woman gets heart attack after being told house will be demolished
Jamaica: Vendors using obeah to get sales
Jamaica: 10 year-old boy found after running away from home for 20th time
Current Visitors: 118 (22 members, 96 guests)

Ok, I forgive you
3 minutes ago

So you like fuh eat dem coolie Pera, bara, phoulowrie. Imagine dem coolie run into the bush, take a shit or piss and run back to sell...
4 minutes ago

Alyuh hear me
2 minutes ago

Krulie can only sell pera
4 minutes ago