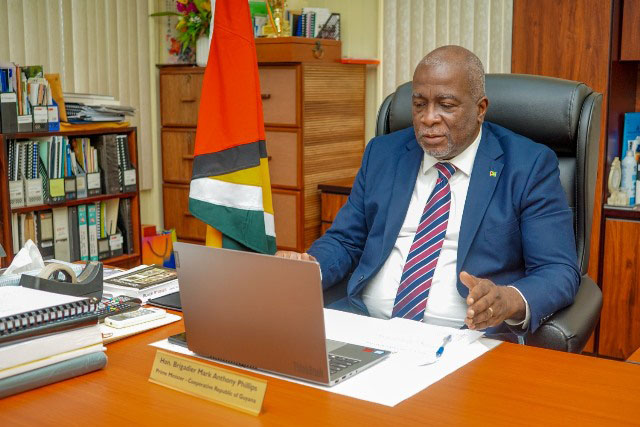 Prime Minister Mark Phillips has announced licensing exemptions for around 50 small internet service providers as part of government’s efforts to expand the telecommunications sector in 2021.

During an appearance on the National Communication Network’s `Budget in Focus’, Phillips explained that during this year his Office will primarily focus on the telecommunications sector especially in relation to ICT connectivity in unserved and underserved areas.

The Prime Minister explained that the plan is to facilitate the connection of 200 hinterland and poor communities adding that a “huge amount of money” is available for this programme.

“I will tell you that money was available before we came into office, but nothing was done. We are now utilising that money to ensure that we roll out the ICT services to all the communities,” he said while acknowledging that a lot of prior work was done in some communities.

These works however have proven to be inadequate with several ICT hubs which were installed by the APNU+AFC no longer functioning.

“Almost every day … [there is] a letter from some community that is requesting assistance to have their ICT hub repaired or otherwise installed. So, the NDMA [National Data Management Authority] will be very busy in 2021, ensuring that ICT connectivity becomes a reality,” he said.

Government’s efforts are expected to be supplemented by the operations of private contractors in the newly liberalized sector, he added.

“Today I have signed an exemption order that is linked towards the 50-odd local small internet service providers. This will prevent them from having to go through a long process to be granted a licence. They just have to register and pay the necessary fees associated with the service,” he explained adding that it is these “small providers who will buy and sell services and are going the extra mile, especially in the areas where the big companies may not necessarily want to go.”

Reminding that the commencement order for the 2016 Telecommunications Act was signed in 2020 following prolonged negotiations, Phillips noted that the three big service operators: GTT, Digicel and E-Networks were immediately licensed.

“Since then, there have been requests for the amendment of licence…which have been facilitated. These agencies have identified the amendments that are necessary for them to expand their services and we’ve gone through the process of ensuring that those amendments are granted for their expansion,” he said.

The Prime Minister further indicated that his Government has an open-door policy for international companies wanting to enter the local telecommunications market.

“Anybody who wants to land a cable come, make your request and you get your licence because we are fully liberalized now and you can come,” he stressed, adding that two to three international companies have submitted Expressions of Interest as has a locally incorporated company.

Join Now
cain replied:
I'd luv to, bring 'e nuh....you an he both WHATAX tarassss.

cain replied:
Oi Shally, next time yo other side posting for you, must leh me know, I gonna lay down some wicked cuss pon e rass....an' dot's no joke.

Totaram replied:
They can't even speak with one voice on this matter. What a bunch of jokers. This PPP government is an embarrassment.
Django replied:
Edghill says bodies boat found by Nicaragua likely the same one seen in Guyana’s waters March 4 ,2020 www.stabroeknews.com Minister of...

The First Death Anniversary of a true hero.
10 minutes ago