A Partnership for National Unity + Alliance for Change (APNU+AFC’)s manifesto has proffered no intention to renegotiate the oil contracts granted to companies for blocks offshore Guyana, despite the fact that every single one of the 19 discoveries made has strengthened the country’s negotiating position and cemented the status of the Guyana-Suriname basin as a world class exploration hotspot. 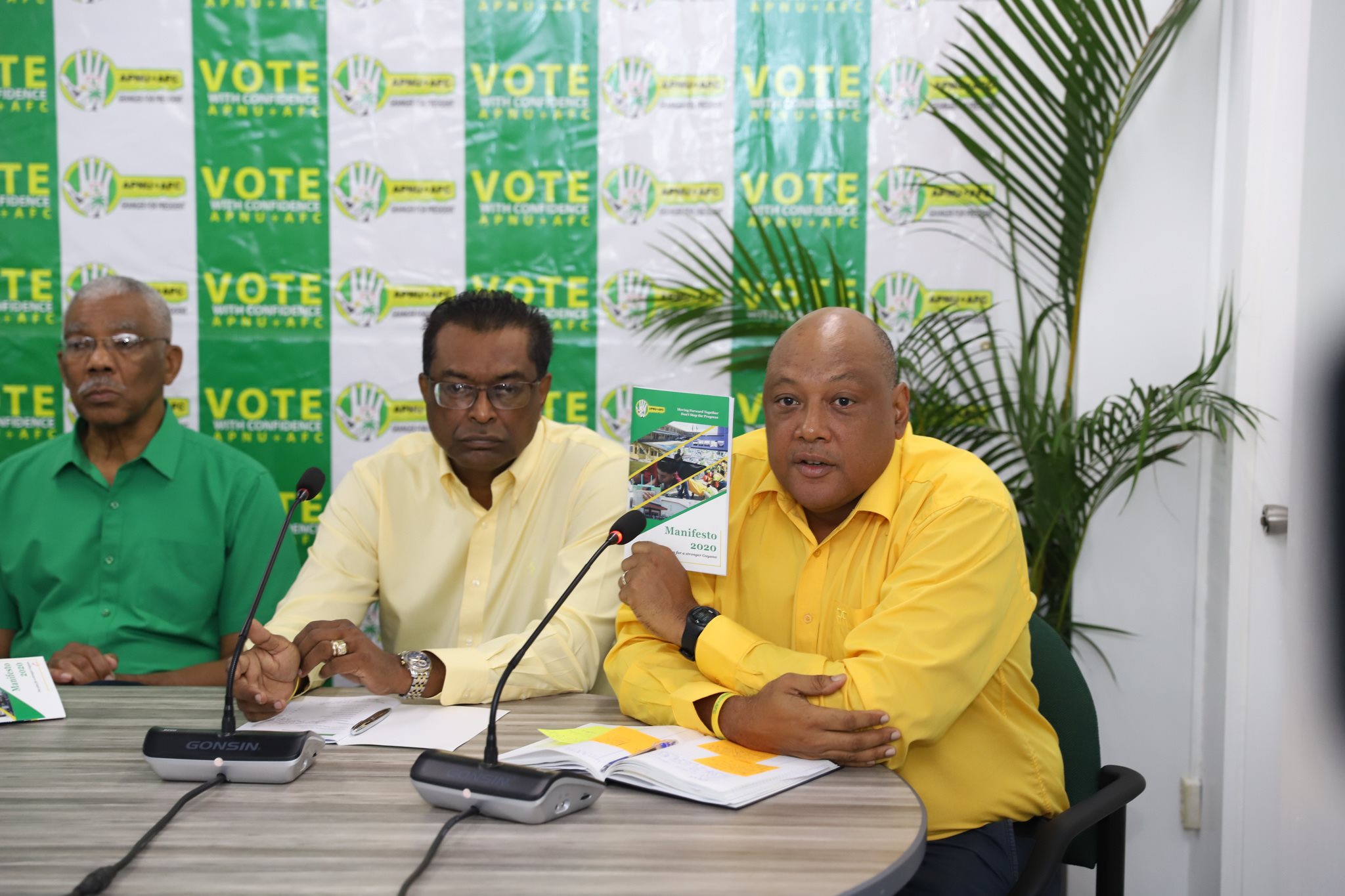 Released on Friday last, the manifesto only refers to contracts in a line about the new production sharing agreement (PSA) model, which is being developed against years of criticism, especially leveled against the notoriously lopsided Stabroek Block PSA.

The party document states that the new model will be institutionalised.

Energy Director, Dr. Mark Bynoe had already said that the Department he leads will not go to a licensing round for new blocks with the old PSA template. However, the governing coalition has never signaled an intention to bring current contracts into conformity with the new template. The coalition’s substantive opponent, the People’s Progressive Party (PPP), has indicated however, that it would renegotiate all oil contracts except the Stabroek PSA, if it wins the March general election.

Just about all the smaller parties contesting the general election have also indicated their intention to seek renegotiation for oil contracts.

Set to be Guyana’s most lucrative industry for years to come, the oil and gas sector has been at the centre of public discourse since ExxonMobil made the first discovery in the Liza field in the Stabroek Block in 2015.

Sure enough, the fiscal terms of the contracts handed to companies that wish to explore and develop Guyana’s coveted blocks have been discussed copiously. Because the contract model they are based on is outdated, the contracts do not reflect modern developments in the industry, nor do they consider Guyana’s increasing value as an exploration hotspot. For instance, the contracts generally carry a royalty of one percent.

The Orinduik Block PSA, operated by Tullow, has been identified by some as the worst contract of them all, even though it carries a meager one percent royalty, Guyana will have to pay that royalty back to the oil companies with its share of production. The Stabroek Block PSA, operated by ExxonMobil, carries a two percent royalty, and even that has been heavily criticised as lopsided and unfair. The criticisms are leveled not just against the royalty, but against a vast series of provisions well documented by this newspaper over the years. Kaieteur News has taken an official stance against the categorically unfair fiscal terms of the Stabroek Block PSA, and has called for a 10 percent royalty as a starting point towards a fair share for Guyana.

The manifesto proffers no new plans for the oil industry. The brief list of intentions for oil and gas, and the wider extractive industries, has already been effectively implemented. The party is yet to set out its detailed plan to get as much value from the sector – let alone – to manage the revenues which will flow in.

The manifesto states, in terms of fiscal governance, that the coalition would implement the Natural Resources Fund Act fully, implement the recommendations of the Extractive Industries Transparency Initiative (EITI) made in its 2017 report, implement measures within the Guyana Revenue Authority (GRA) to monitor the sector, and amend the Petroleum (Exploration and Production) Act.

For local content, the manifesto states that the policy will be enshrined in legislation, with emphasis placed on local workforce development, supplier development and knowledge and technology transfer.

For environmental protection, the manifesto re-announces work on the developing oil spill contingency plan and the development of Guyana’s oil spill response capacity.

All of these propositions are already in play, and are the minimum requirements for the management of the sector.

The party promises reliable and affordable electricity from associated gas from the Liza-1 project, and a gas terminal, which would seek to create opportunities for employment. A similar promise has been made by the opposition.

Sign In To Reply
Post
Current Visitors: 154 (19 members, 135 guests)
Welcome to the Original Guyanese Discussion Forums, first established in 1996. Here you can discuss, ask questions or generally debate anything related to politics, movies, music, health or just gyaff away your day/night here. A note of warning, the Political forum is not for the faint of heart.  We do have some rules, so please adhere to them.
Privacy Statement - Rules
Join Now
The AFC is the ultimate definition of a parasite
44 seconds ago

Now this is beyond chupid. Skelden prick is uber bassidy!
53 seconds ago
This guy Timothy Jonas has a good head on his shoulders. He is a straight talker, knows the constitution well, and is not afraid to call...
3 minutes ago

Totaram has traces of our long lost friend Gerhard.
5 minutes ago
To retool a factory for making ventilators will take up to three months. In the mean time they need these items like yesterday. Doctors...
7 minutes ago
AFC ready for talks on national unity government, lays down minimum arrangements
44 seconds ago

Testing the border closure.
5 minutes ago
Is US now a shithole country?
7 minutes ago