January 20, 2020, Source - https://guyanatimesgy.com/apnu...-remain-unfulfilled/
…Rome wasn’t built in a day – Volda Lawrence
A Partnership For National Unity/Alliance For Change (APNU/AFC) held a public meeting with supporters in the Kitty Market Square, Georgetown, on Sunday evening where they urged supporters to give them another chance despite the admittance of unfulfilled manifesto promises. 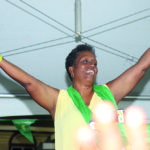 APNU/AFC national candidate Nicola Trotman
Addressing the gathering, Public Health Minister Volda Lawrence admitted that there is still much to be done on the part of the Government. As she told the gathering of coalition supporters, however, “Rome wasn’t built in a day”.
Lawrence urged persons to go on and vote on Elections Day – March 2. According to her, it was important that persons not only check to ensure their names are on the list; persons must also know how to vote on Election Day.
“I don’t want all them spoil votes like the last time. Remember, you have to vote once! We have to ensure that we bring everyone out to vote,” Lawrence stressed, adding also that scrutineers must also be vigilant. 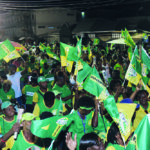 A scene from the meeting in Kitty
Meanwhile, AFC member and APNU/AFC candidate Nicola Trotman also acknowledged that there is much left to be done. She noted in her address that the Government did make certain promises that were not followed through.
“The coalition Government made promises. Not all of them bore fruit. But we beg you to have tolerance with us. However, we have given you a better life. We have increased public servants’ salary…and old age pension to $20,000. So you got a better life!” she stressed.
Meanwhile, Minister Lawrence, in introducing the final speaker alluded to a “young” Minister. In fact, she was introducing Communities Minister Ronald Bulkan, who, in taking the stage, encouraged supporters to vote for Government based on the promises they did keep.
“We ensured that Local Government Elections were held, in keeping with our promise. Local Government Elections were held for the second time in 2018. What does this do? It ensures that people, wherever they live, have the right to elect candidates within their own areas who would have responsibility to manage and develop their communities.”
Promises
A broken promise of APNU/AFC that was alluded to by the People’s Progressive Party (PPP) only Saturday in Anna Regina was a promise to establish a rice stabilisation fund. The establishment of a rice stabilisation fund would ensure that farmers are protected from price swings on a volatile global market.
Back in 2016 during an address to Parliament, President David Granger himself made a commitment to have it established. Fast forward to 2020 and it is one of several promises that the PPP has highlighted remain unfulfilled, alongside the promise to put systems in place to allow farmers to earn $9000 per bag of paddy.
Another promise was to provide jobs. However, the PPP has consistently taken the Government to task for doing the exact opposite, pointing to the thousands of sugar workers that have been dismissed in the sugar belt as the Government sought to downsize sugar by shutting estates against the advice of its own inquiry.
Other promises include providing housing and eradicating blackouts. Blackouts remain a distressing issue for certain parts of the country, while the distribution of house lots has reduced significantly since the change of a in 2015 despite the fact that the demand has not decreased.
This is evident in the 2017 Annual Report of the Central Housing and Planning Authority (CH&PA) which was recently laid in the National Assembly. The report shows that a total of only 1131 house lots were allocated in that year for qualified applicants.
This does not compare favourably with the previous year, which, according to the report, 2020 house lots were allocated in 2016, an improvement on its original target of 1100. This includes 625 low to moderate-income house lots and 1395 middle to high-income house lots.
But both of these years’ figures pale in comparison to the number of house lots distributed in previous years under the former People’s Progressive Party (PPP) Administration. In the CH&PA’s 2013 Annual Report, its programme performance assessment had indicated that 4417 house lots were allocated, just shy of the 5900 target.
Take Action
Original Post

January 20, 2020, Source -- https://guyanatimesgy.com/jagd...guyanas-development/
Linden rally
The A Partnership for National Unity/Alliance For Change (APNU/AFC) coalition Administration failed multiple times in almost five years to include young people in the plans for Guyana’s future, and ensured that the older generation were placed in seats of power.

Opposition Leader Bharrat Jagdeo
This is according to Opposition Leader and People’s Progressive Party (PPP) General Secretary Bharrat Jagdeo, who told hundreds of party supporters at Lien Ken-Pen Square, Linden, Region 10 (Upper Demerara-Berbice) on Sunday, that unlike the current Government, the PPP/Civic has over 50 young persons included on its list of candidates for the upcoming Regional and General Elections. 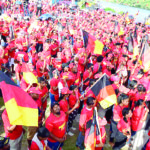 A section of the gathering in Linden
He said that while young persons were being given a chance at leadership, this was in no way being disrespectful to the older generation who have given valuable contributions to the Party.
“It doesn’t mean we want to get rid of older folks, but we are a growing party, a changing country and we have to include young people… In 2015, people who come here (Linden) now to tell you to vote for the coalition told you that at previous campaigning in 2015 and they have been excluded (by their government) since. They misled young people when they promised them jobs and opportunities,” the Opposition Leader told the gathering.
According to Jagdeo, the PPP/C strongly values the contributions of both the young and old generations and its core is built on collaboration from peoples of all walks of life, all religions, and all ethnicities in Guyana.
“But this Government (APNU/AFC) preaches disinformation, preaches racism. They cannot run on track record because they have no achievement, trying to divide our people along the racial lines. But collectively, we will fight it down every day; we have a multi-ethnic nature in the PPP.”
He urged the crowd in Region 10 to vote for the PPP/C in the upcoming elections slated for March 2, 2020, adding that once the Party replaces the current Government, it would provide more and better job opportunities, better health care and development of more communities while including youths “in a meaningful way”.
In the plethora of instances where Jagdeo flayed the APNU/AFC Government for failures and what he deemed as blatant acts of corruption, he cited the recent inking of an agreement between a private contractor and the current administration to construct a school at Yarrowkabra, Linden- Soesdyke Highway to the tune of over $800 million.
This, he said, was an illegal act since the Government was still in “care taker” mode following the Caribbean Court of Justice (CCJ) ruling after the valid passage of the No-Confidence Motion that was passed on December 21, 2018.
Additionally, he elaborated that the “good life for all” slogan being trumpeted by the APNU/AFC was “hollow and meaningless” since the vast majority of the country’s populace has never experienced the “good life” to date after 2015.
“People now are paying taxes on food stuff, baby diapers, Value Added Tax (VAT) on medicine, VAT on water, VAT on electricity that is amounting to $88 billion out of your pocket. They have spent $1.1 trillion of our money over the years and yet all of our sectors are in trouble,” Jagdeo stated.
According to the PPP General Secretary, the current administration had put in place “anaemic policies” with no consistencies in its goals or policies.
He noted that the current Government has spent hundreds of millions of dollars that was left in the country’s treasury and handed over to it in 2015, but there have been no developments to date that would account for the wasted taxpayers’ dollars.
“Every agency that we left money in – it is now zero. The $10 million at the Guyana Geology and Mines Commission (GGMC) is gone. The $20 million in the gold reserves – all gone,” Jagdeo told the Region 10 community.
Like Reply (0 Likes)
Take Action
Back To Top

Sign In To Reply
Post
Manage Topic
Welcome to the Original Guyanese Discussion Forums, first established in 1996. Here you can discuss, ask questions or generally debate anything related to politics, movies, music, health or just gyaff away your day/night here. A note of warning, the Political forum is not for the faint of heart.  We do have some rules, so please adhere to them.
Join Now
Loading...
Current Visitors: 75 (2 members, 73 guests)
They need to move supply chains to India. The worse you catch visiting is diarrhea.
5 hours ago

May be part of the wider studies and not dentistry itself.
5 hours ago