An event aimed at forging links between the North East of Scotland and Guyana has been hailed as a resounding success.

During a three-day trade mission to the area, 12 representatives of Guyanese government, industry, academia and commerce met with local businesses and organisations in a bid to strengthen relationships between the locations.

One highlight of the itinerary was the inaugural Aberdeen-Guyana Gateway lunch at Macdonald Norwood Hall Hotel, Aberdeen on Thursday, November 29th which drew an audience of 90.

Leading the visiting delegation was Nicholas Deygoo, Senior Vice President, Georgetown Chamber of Commerce & Industry supported by His Excellency Frederick Hamley Case, High Commissioner of The Co-operative Republic of Guyana in London and Greg Quinn, Her Majesty's British High Commissioner to The Co-operative Republic of Guyana.

The trip was hosted by Aberdeen-based Granite PR, ABIS Energy and Aberdeen City Council and supported by other companies and industry bodies interested in exploring or expanding opportunities in Guyana.

Commenting on the success of the visit His Excellency Hamley Case, the Guyanese High Commissioner to the UK said: “Further to earlier meetings in 2018 with The Lord Provost, I had suggested a trade mission and I am pleased that ABIS Energy has managed to generate the interest for this to occur in such a short period of time.

“This visit to Aberdeen by the Georgetown Chamber of Commerce and Industry is demonstrating that there is significant opportunity for both Guyanese and Aberdeen and indeed UK companies to work together for mutual benefit to develop the oil and gas industry in Guyana.”

The UK High Commissioner to Guyana, Greg Quinn, commented: “We truly believe that the experience gained over the past 50 years in Aberdeen and the UK as a whole by private enterprise and government is something that can be packaged to transfer to Guyana as they look to establish their oil and gas industry and The British High Commission is keen to facilitate these opportunities as we go forward.”

Brett Jackson, Founder/MD of Granite PR and creator of the international Gateway event series said: “This was the second inaugural Gateway of 2018 and a fitting end to our tenth anniversary year.  We were delighted to collaborate with ABIS Energy to deliver an event which has surpassed our expectations in terms of the interest it has generated.

“The exciting difference on this occasion is the fact that Guyana stands at the dawn of its oil industry and the opportunity to be part of this is an interesting prospect for many, as demonstrated by the excellent turnout.  The success of the Aberdeen-Guyana Gateway further underlines the appetite which exists for this networking and knowledge sharing platform and we hope that it will act as a springboard from which participants can grow their connections and business opportunities.”

Francis Kiernan of ABIS Energy added: “The various meetings we have had with Guyanese government and private business this year culminating in this trade mission and Gateway have made clear, not only the incredible opportunity that Guyana holds for Aberdeen and UK businesses, but also the similarities that exist between our working environment in terms of law, language, certain practices and indeed sense of humour.

“ABIS Energy is committed to developing business with Guyana and we look forward to working with both Guyanese and UK companies to make this happen.”

To find out more, email info@granitepr.co.uk

Dozens of industry representatives gathered in Aberdeen yesterday to help the North Sea partner with the new “El Dorado” of oil and gas.

Guyana has emerged as one of the most prospective energy regions in the world, with ExxonMobil making the 4.2billion barrel Liza discovery three years ago.

A Guyanese trade delegation is now in Aberdeen to build a “bridge” between the two regions, which could result in a “win-win” scenario for the new industry and the mature North Sea sector.

This came to a head yesterday at the Aberdeen-Guyana gateway event, organised by Granite PR, where delegates heard the country has near “unmatched potential” for oil and gas, and the North Sea can help develop it.

Among the speakers were representatives from Guyana’s Oil and Gas Association, the Georgetown Chamber of Commerce and the UK’s Oil and Gas Authority.

He said: “Guyana has always been described as the country of potential but its development has actually been restrained.

“It goes back hundreds of years. Sir Walter Raleigh went there to find El Dorado. He promised the king that he would find El Dorado in Guyana and he didn’t quite manage to find it and he got his head cut off as his reward.

“So the penalties of failure are always there, but we have this country of almost unmatched potential and now oil and gas is part of that.

“We have the experience and energy to develop offshore resources in a very productive and respectful way.” 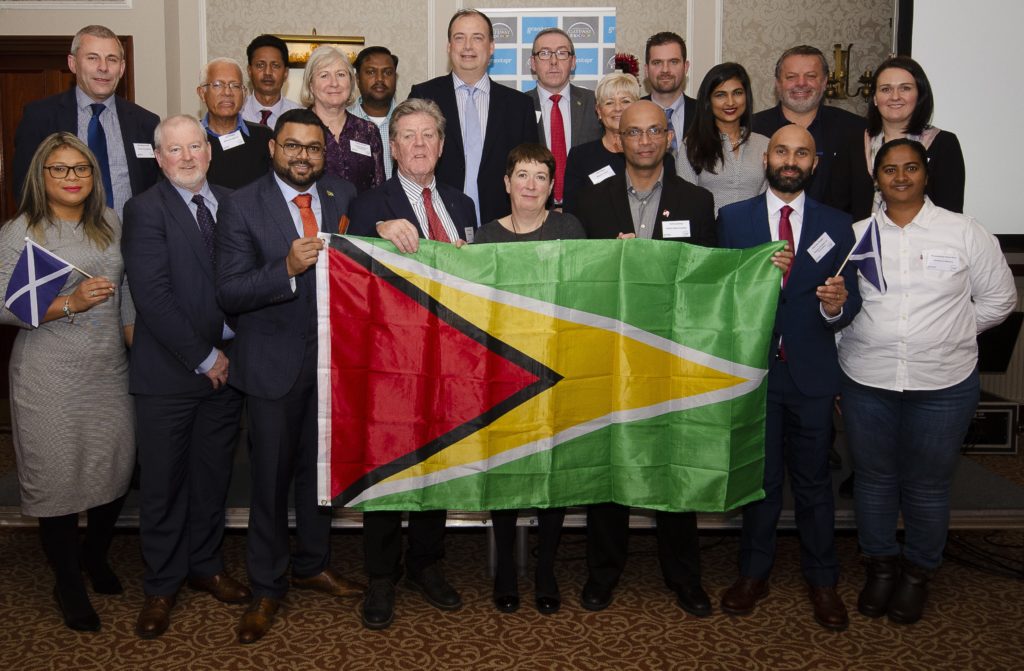 The Oil and Gas Authority outlined how Guyana has been identified as a key region  for its 2035 strategy to double the amount of exports from UK suppliers.

That opportunity was highlighted by the Guyana Oil and Gas Association, who said work including development of marine and aviation infrastructure could be done with the help of UK firms.

Nicholas Deygoo, senior vice president of the Georgetown Chamber of Commerce, said the foundations of a partnership are now in place.

He said: “I think we have set the foundation for a bridge that will allow exchange of information, potentially some joint ventures, and a lot of maximising potential.

“Companies here in Aberdeen have experience, they have existing products and portfolios of services, that they can take to Guyana.

“I think it would be a win-win for them to come across and start to provide those services, especially in conjunction with Guyanese companies or Guyanese employees.”

The fact Guyana is English-speaking and part of the Commonwealth were highlighted as some of the incentives for doing business there.

However, it came with a warning that other oil hubs which are geographically closer, such as the Gulf of Mexico, could beat the North Sea to the punch.

Chairman of the event and managing director of Abis Energy, Francis Kiernan, said: “The thing to remember is we have competition.

“It is significantly further from Georgetown to Aberdeen than it is to Houston, Texas.

“If we’re going to be successful here we need to provide the best that we’ve got and we need to make very good use of the connections we have with the Commonwealth and with a large amount of Guyanese people who live in London and have a lot of sympathy and empathy towards us on how we do business.”

You see datt!  Lil ile mek yuh feddas fluff up, da till di ile get pon you own feddas!

We need these Scotts to help fend off the Conquistadors!  Dem still agitating and Trump always in some spin cycle!  God bless the Queen!

Sign In To Reply
Post
Current Visitors: 169 (3 members, 166 guests)
Welcome to the Original Guyanese Discussion Forums, first established in 1996. Here you can discuss, ask questions or generally debate anything related to politics, movies, music, health or just gyaff away your day/night here. A note of warning, the Political forum is not for the faint of heart.  We do have some rules, so please adhere to them .
Do not post any messages that are obscene, vulgar, sexually-orientated, racist, hateful, threatening, or that otherwise violate any laws. Do not post any messages that harass, insult (name calling), belittle, threaten or mock other members.

Join Now
Tola replied:
Like de PPP teach you this at FreeDum school.

Tola replied:
If Rama kant, how come you still hea and not in PPP paradise ?

I am Invited to Join The Backdam Crew by a member.
2 minutes ago