An interactive map highlights the least traveled routes in the country—and some of the most scenic.

This article was originally published on March 19, 2018, by CityLab, and is republished here with permission. 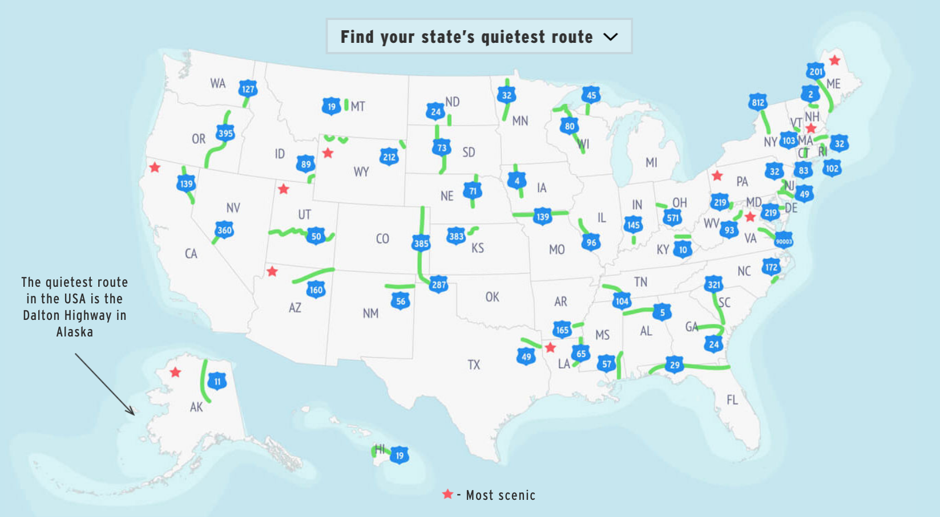 Among road-trip enthusiasts, the Alaska Highway is a favorite. It runs more than 1,300 miles, dazzling travelers with tundras and sightings of eagles, caribou, and the like.

But if you want to take the road less traveled, a study by the GPS-company Geotab suggests you should go north to the James W. Dalton Highway, Alaska’s hidden gem. It runs 414 miles from Fairbanks to Deadhorse, and sees mostly ice road truckers, with few service stations and small towns in between. You would, however, be greeted by majestic snow-covered mountains and glimpses of the Yukon River. 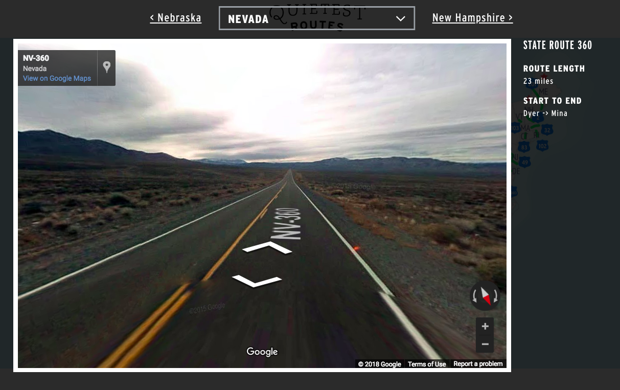 In fact, it’s the quietest route in all of the United States. That’s according to the study, which crunches 2015 annual average traffic data from the Highway Performance Monitoring System to find the least traveled roads in each state, and in all of America. The results are highlighted in an interactive map. Click on a state, and you can get a virtual preview of each route via Google Street View. The site also offers the top 10 most scenic paths (starred on the map) from those listed, as ranked by the conservationist and photographer James Q. Martin, who collaborated with Geotab on the study.

Topping both lists—for the least traveled and most scenic— is Dalton Highway, which ferried an average of just 196 vehicles each day in 2015. (By comparison, the Alaska Highway saw an average of 344 vehicles per day, according to 2016 data.) Other least traveled roads include routes in Nevada, Montana, North Dakota, and South Dakota. 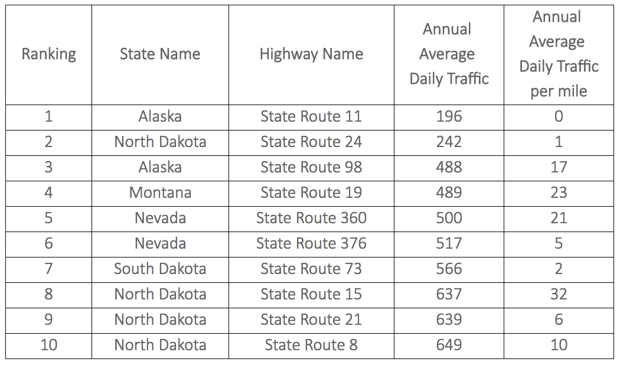 Undoubtedly, the roads’ unforgiving terrain and remote locations are part of the reason why they don’t get many visitors. Just read this account by New York Times reporter Alan Feuer, who trekked through Dalton Highway in 2014:

Lost in a reverie about how Tolkienesque it seems, you might pass through a valley choked with blinding fog or skid across a sudden patch of washboard, that angry rutted surface that—chukka-chukka-chukka—buckets you up and down.

If you are up for the adventure, though, Martin has named it the most scenic off-the-beaten-path route. “It’s a road that reaches the top of the continent, and would literally allow you to see a polar bear in the right circumstances,” Martin said in a statement. In second place is the 335-mile stretch of U.S. 50—often dubbed ”America’s Loneliest Road”—that runs across Utah and offers scenic views of “the vast emptiness of the Great Salt Lake Desert.” That road sees a little over 1,000 cars each day. And if deserts or snow aren’t your thing, ranked third is Maine’s “Old Canada Road,” lined with lush trees that show off all shades of reds and oranges in the fall. It runs through several historic towns right up to the Quebec border.

Even as gas prices fluctuate, Americans have not given up on road trips. The latest “Portrait of American Travelers” report from the travel marketing agency MMGY Global, who interviewed 3,000 people, found that road trips represent 39 percent of vacations in 2016, up 17 percent from the year before. The sustained appeal, according to the New York Times, is the practicality of it all. There’s flexibility in when and how the trip can be organized, and what people can bring with them. It’s also less costly than flying to another destination, and it bypasses the pain of airport security.

Yet, at least for some, the urge to hit the open road must have something to do with the chance to escape the crowds and find something new. And what better way to do that than by setting out with a curious mind for the places most other people are passing by?

CORRECTION: Due to mapping errors by Geotab, the original version of this map misplaced highways in New Hampshire, Michigan, and Minnesota. They have been corrected.

Linda Poon is a staff writer at CityLab covering science and urban technology, including smart cities and climate change. She previously covered global health and development for NPR’s Goats and Soda blog.

South Dakota got some lonely roads.

Welcome to the Original Guyanese Discussion Forums, first established in 1996. Here you can discuss, ask questions or generally debate anything related to politics, movies, music, health or just gyaff away your day/night here. A note of warning, the Political forum is not for the faint of heart.  We do have some rules, so please adhere to them.
Join Now
Loading...
Current Visitors: 361 (13 members, 348 guests)
https://youtu.be/-Y7TsJx4B7o
3 minutes ago

It could be waste oil or oil from a fishing boat.
4 minutes ago

ok nOT ANOTHER WORD ON HIM!!!
23 minutes ago

A SUBSTANCE THAT APPEARS TO BE OIL, CAN BE SEEN ON THE WATERS OF THE ATLANTIC OCEAN.. COMING TO THE SHORES OF GUYANA
4 minutes ago

Who remember Uncle Nehru
23 minutes ago

Ray. Your bai Bloomberg was an utter failure.
30 minutes ago

Looking forward to this debate tonight
36 minutes ago

Ralph Ramkarran, A New & United Guyana.. will he make it to the finish line...
2 hours ago