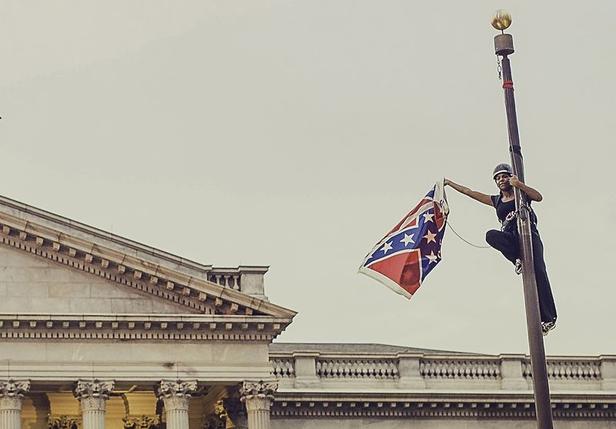 Bree Newsome takes down the Confederate Flag from a pole at the Statehouse in Columbia, South Carolina, June 27, 2015.
Reuters/Adam Anderson Photo

An activist climbed a flagpole outside the South Carolina state capitol early on Saturday and took down the Confederate flag, state officials said, a day after U.S. President Barack Obama called the banner a symbol of racial oppression.

Two people were arrested and charged with defacing a monument, the South Carolina Department of Public Safety said in a statement. The banner was replaced within an hour, it said.

The Civil War-era flag has been a focal point in the United States after the fatal shooting last week of nine African Americans during a Bible study session at the historic Emanuel African Methodist Episcopal Church in Charleston.

South Carolina Governor Nikki Haley was applauded on Saturday at the funeral of one of the victims, librarian Cynthia Hurd, when she told mourners, "I am sorry this happened on my watch, but we will make it right."

Haley, who has attended all four of the funerals so far for the victims, on Monday led calls for the flag's removal saying that while it was an important part of South Carolina's past, it "does not represent the future of our great state."

The suspect in the shootings, Dylann Roof, 21, had posed with a Confederate flag in photos posted on a website that also displayed a racist manifesto.

A group of local activists said they organized the removal of the flag, which by law flies at a memorial on the Statehouse grounds honoring soldiers who fought on the side of the pro-slavery Confederacy during the 1860-65 American Civil War.

"We could not sit by and watch the victims of the Charleston Massacre be laid to rest while the inspiration for their deaths continues to fly above their caskets," an activist group organized under the Twitter tag #KeepItDown said in a statement.

At a funeral for the slain Emanuel church pastor in Charleston on Friday, Obama called the banner "a reminder of systemic oppression and racial subjugation".

"For too long we were blind to the pain that the Confederate flag stirred in too many of our citizens,” Obama said in his eulogy for Reverend Clementa Pinckney, 41.

The South Carolina Legislature is expected to begin debate next week on removing the flag from the memorial. 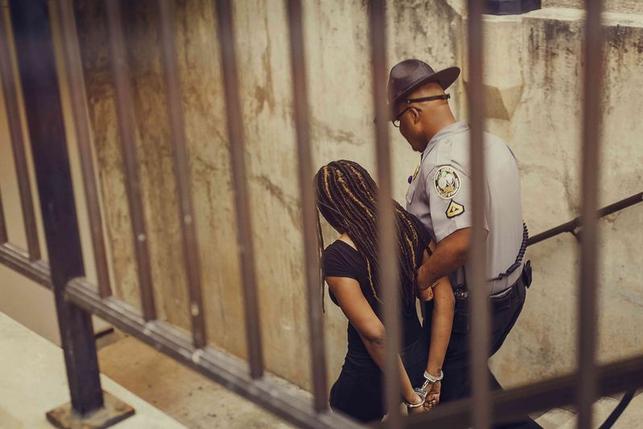 Bree Newsome is arrested after taking down the Confederate Flag from a pole at the Statehouse in Columbia, South Carolina, June 27, 2015.
Reuters/Adam Anderson Photo
Like Reply (0 Likes)
Take Action 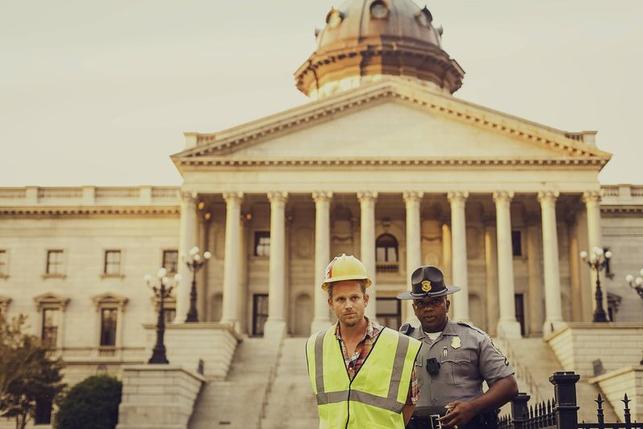 James Tyson is arrested after aiding Bree Newsome to take down the Confederate Flag from a pole at the Statehouse in Columbia, South Carolina, June 27, 2015.
Reuters/Adam Anderson Photo
Like Reply (0 Likes)
Take Action 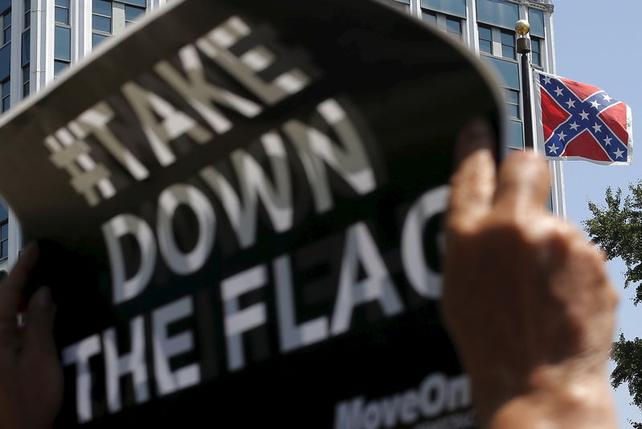 A demonstrator holds a sign at a rally outside the State House to get the Confederate battle flag (R) removed from the grounds in Columbia, South Carolina June 23, 2015.
Reuters/Brian Snyder
Like Reply (0 Likes)
Take Action
Former Member

Indeed and we shall see what will develop.

Sign In To Reply
Post
Manage Topic
Welcome to the Original Guyanese Discussion Forums, first established in 1996. Here you can discuss, ask questions or generally debate anything related to politics, movies, music, health or just gyaff away your day/night here. A note of warning, the Political forum is not for the faint of heart.  We do have some rules, so please adhere to them.
Join Now
Uitvlugt Estate has suffered 48 hrs of breakdowns in just second week of crop –GAWU
Coronavirus now poses “very high” risk at global level -WHO
Speed limit on Linden Highway cut because of soil erosion
Trinidad born rap­per Nic­ki Mi­naj makes donation to St Jude’s Home for Girls
Jamaica: Slain former Reggae Boy hailed
Jamaican security guard kills wife in Trinidad
Jamaica: Woman gets heart attack after being told house will be demolished
Jamaica: Vendors using obeah to get sales
Current Visitors: 114 (18 members, 96 guests)
Kudlow (and cramer) is one of the bigges fackin fraud..the mofo was tellin people to buy stocks in 1999 because in the bubble because in...
11 seconds ago

Lowering the rates only ease the bleeding, instead of 1200 loss, it will drop to a loss of 500. One week loss wipes out one year gain.
1 minute ago
Re: INTERVIEW WITH OPPOSITION LEADER DR BHARRAT JAGDEO.
3 minutes ago

If Trump was here, Kudlow and Powell wouldn’t talk shit and caused a panic. I’m surprised the words they chose knowing the sensitivity.
3 minutes ago

Lemme tell yuh something..de market was due fuh a serious correction..fugey abot 10%. Think 30-50%. It could have been anything to...
3 minutes ago

How much snow all you get ?
15 minutes ago

TIME TO BIG UP OUR GUYANA
23 minutes ago