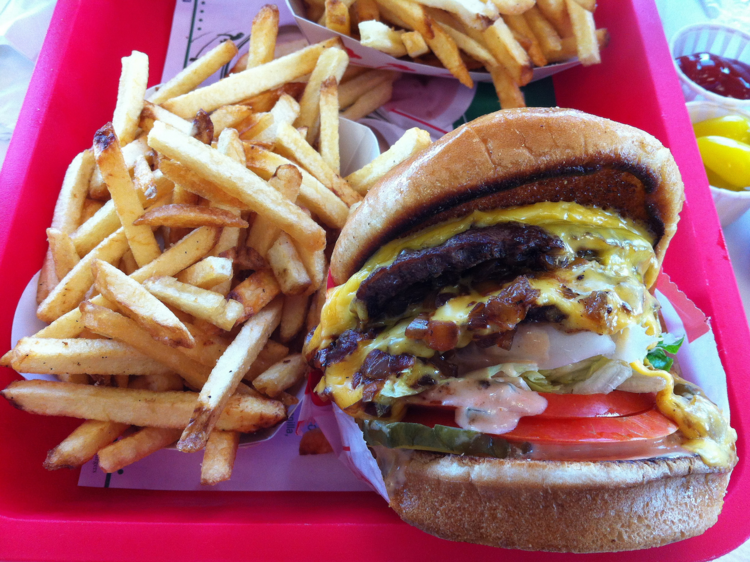 Most of what we think of as quintessential American foods like burgers and fries, barbecue, and fried chicken are surprisingly not actually American at all. Burgers come from Germany, barbecue originated in the Caribbean, and fried chicken's roots may be disputed, but the Southern favorite is not entirely an American invention.

INSIDER has rounded up 14 of the most surprising and interesting American culinary impostors, and given a short history of where (and how) they actually came to the American table.

The hamburger comes from Hamburg, Germany.

Hamburgers may be known as an American fast food staple today, but their origin story dates back to the growth of cattle domestication in Hamburg, Germany, during the 12th century, according to the History Channel. There, meat patties are known as frikadellen or buletten.

During the 19th century peak, political unrest caused many Germans to immigrate to America, where they opened beergardens that served "Hamburg-style" chopped steak, as Hamburg was known to export high quality meat.

The hamburger found its way onto a bun during the 1904 St. Louis World's Fair where it was introduced as a brand-new food, along with ice cream cones and cotton candy.

French fries are not American: they're Belgian and French.

The true origins of French fries may be disputed, but they are definitely not American.

As one story goes, according to National Geographic, Belgian fishermen during the turn of the 20th century used to fry potatoes when it was too cold to fish. American soldiers came across them during World War I and dubbed the food invention "French fries," since Belgians spoke French in that region.

Other food historians claim that French street vendors were selling French fries as early as the 1780s, known as "pommes frites." In this case, Thomas Jefferson is often credited with introducing French fries to America by serving "pommes de terre frites à cru en petites tranches" (potatoes deep-fried while raw, in small cuttings) to guests during his presidency.

"Few people took potatoes seriously on the continent until the end of the 18th century," food historian Ken Albala at the University of the Pacific told INSIDER. "Probably at some point in the early 19th century the French and Belgians started frying them in fat. Arguably the Belgians are better at it, hence the claim."

The original recipe for ketchup was invented in China.

Ketchup may be synonymous with the Pennsylvanian entrepreneur H.J. Heinz, but the idea of a fermented food paste actually derives from the Hokkien Chinese word "kê-tsiap," which was originally a fermented fish sauce, according to National Geographic.

Ketchup paste was copied by the British in the 18th century, but often used ingredients like mushrooms, walnuts, oysters, or anchovies.

The first-ever ketchup recipe featuring tomatoes was published by American horticulturalist James Mease, but it lacked vinegar or sugar. It was not until 1876, when H.J. Heinz came up with a new safer way to preserve tomato ketchup, that "Heinz ketchup," and thus ketchup as we know it, was born.

"As American as apple pie" may be a famous saying, but recipes for pie can be found as early as the Ancient Greeks, according to the American Pie Council. However, medieval England popularized the dish, then known as "pyes" with crusts called "coffyns," and usually filled with meat.

Modern apple pie made with a lattice-style crust was created by Dutch bakers during the 15th century, while the first fruit pies in England were invented during the 16th century Elizabethan era, though they were made without sugar, according to The Culture Trip.

Both Dutch and British settlers are credited with bringing the humble apple pie to the Americas.

Macaroni and cheese may derive from an Italian medieval cookbook.

While Thomas Jefferson is often credited with inventing macaroni and cheese after he brought back a macaroni machine from a trip to Europe, he was not the first to come up with the idea, according to the Thomas Jefferson Foundation.

Macaroni derives from the Italian word "maccheroni," which at the time was a general term for pasta. What is believed to be the original recipe for macaroni baked with a cheese sauce can be found in the 14th century cookbook, "Liber de Coquina," which is thought to have been written by an Italian author, and is printed in full (in Latin), here.

Join Now
Current Visitors: 151 (0 members, 151 guests)
Arya looks like she can make a serious mutton curry. You fellas notice Irfan put on weight since he got married.
3 hours ago

I like this way of moderating. But it seems when a moderator shows much about their political support by posting her/his political...
4 hours ago

The idea of moderating is not about banning or suspending members, it's to make sure a civil debate/discussion is maintained at all...
4 hours ago

Roaches would survive even the apocalypse..tarasss.
4 hours ago

sigh; There goes another chance fo me become moderater so Iman could do some real good bannin pon some loudmouth people dem.
4 hours ago

Moderators and Admin of Forum
4 hours ago

My girl Tulsi
4 hours ago