Are you starting another inciting thread, yuji?

What is Hinduism's dark secret?

I'm a Hindu like you. You claim to be a Brahmin. I have Chattry blood.

Why are Chamars/Dalits treated worse than dogs in India?

Dalits have so-called constitutional protection but in real life they are the most oppressed caste.

There is no end to your mischievous threads, yuji.

I have condemned India's caste system. It is being dismantled by a younger generation.

The cast system has never been a part of Sanatana Dharma. It was created by a wicked bunch of caste Bramhanas to divide people.

Yuji is not a caste Bramhana.

I speak out against injustice as I see fit. I know a whole community of Ahmidas who live in the City of Vaughan and the are first class citizens and I have heard horror stories of how they are being persecuted in Pakistan.

I clearly remember a Ahmadi friend in Guyana who was scorned upon by other muslims. I am just posting on a matter as I see fit.

From the beginning of time four cast system was

and Sudras and was related to their professions. 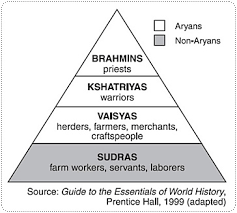