Linden town treasurer refuses to sign off illegally on cheques. 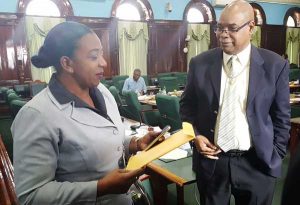 Treasurer of the Linden Town Council, Audrey Nelson, was yesterday commended for standing up to councillors by refusing to authorize spending of government funds without following the correct legal procedures.
During the Public Accounts Committee (PAC) meeting, Nelson declared that the municipality has issues following procedures. By the end of 2016, the council held roughly $12.8M in ‘a special account’ set up to receive funding from central government.
Some $3 million of the full amount allocated had been spent. Nelson stated that that councillors wanted to spend the money on programmes without the approval of central government.
The monies were kept in the account because the Ministry of Communities and the Ministry of Finance are exploring whether the unspent monies in the municipalities needed to be returned to central government or the council members can  approve the monies be spent on other projects.
“Under the subvention programme that is being given, we had to stay within the ambits of the programme and spend the money within the ambits of the programme. They wanted us to go outside of the programme,” Nelson explained.
The treasurer told the PAC that she resisted the attempts and informed the councillors that in order to release the funds, approval needed to be sought from central government. Nelson stated that the councillors have not pursued approval for redirecting the funds although they have often spoken about it.
“We try to tell them that this is the process; they still want to go outside of it,” Nelson noted.
She told the PAC that the councillors are from other organisations and so they believe that they can approach public finances the same way that they approach business privately.
Nelson and the Linden Town Clerk are authorised to sign cheques on behalf of the council.
PAC Chairman, Irfaan Ali commended Nelson for standing her ground on public monies. Nelson also told the PAC that she is pursuing the finalisation of the accounts report by putting in place an assets register.