Yall pnc doormats can't think for yourselves. You just react instead of analyze. Where is the study that states that Guyana has more per capita domestic violence than most other countries? You think sitting in your high horse in merica and canada talking down to the people in Guyana like lilmohan will solve any issues? Take care of your own backyard before trying to tell Guyanese people that they are worst offenders.

Right. Are you, Rat groupie, just asking for the study or do you sincerely believe there is no high rate of domestic violence in Guyana? Maybe you have a personal interest in ensuring there is no interference when men beat their women in Guyana?

just as I though, a bunch of overseas high and mighty jackasses talking down to the Guyanese public. Let them people take care of their own problems, they are more than capable without your help. There are enough organizations there in Guyana to handle the issues. Instead of giving lip service, why don't you contribute to one of the organizations in Guyana like Red Thread. They do more at the grass roots level than you folks from your armchair and tight wallets in the West.

Red Thread on a mission to end Domestic Violence

Red Thread is slowly moving to establish a systematic and holistic approach to addressing domestic violence in Guyana.  The group is currently finalising a report on its two-year project implemented through funding from the US Department of State. 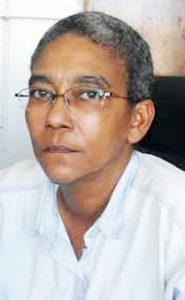 The project titled “Engaging communities for improved implementation of domestic violence laws” engages residents in five communities to provide leadership and transformative action towards adequately addressing domestic violence.
The aim of the project includes generating research that could drive policy and identify areas for training and technical assistance to improve the implementation of the Domestic Violence (DV) Laws. An integral activity of the project was to assess the efficacy of the police and judicial systems in addressing DV case.
Red Thread has so far assessed, organized and mobilized community monitors in the various communities who have been observing police and court practices as it relates to addressing the social scourge.
Addressing a conference at the Education Lecture Theatre (ELT), University of Guyana Campus on Friday, Red Thread Coordinator, Karen DeSouza, told the gathering, which included a wide cross-section of representatives of stakeholder groups that although the research is in its finalized stage, the main challenges remain to help the citizenry understand their role and how to overcome common attitudes towards addressing cases of domestic violence.
According to De Souza, in the course of training the victim blaming and shaming attitude mentality by members of public particularly those involved in law enforcement was the most common challenge.
She noted that Red Thread is continuing its work with the police and judiciary to develop a more effective approach to Domestic violence