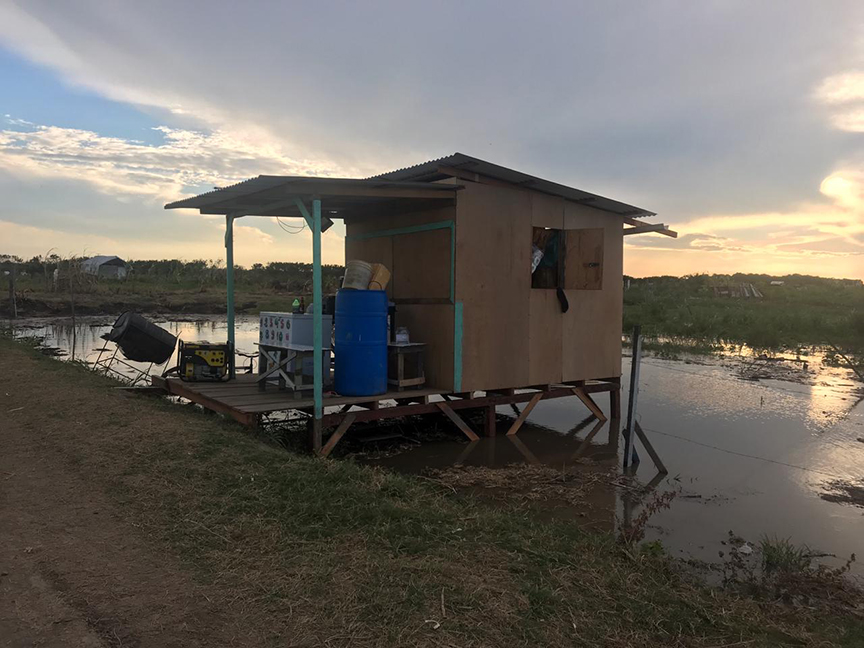 Some squatters have started to vacate settlements at Success, East Coast Demerara, after a confrontation led to police firing pellets at them.

Some of the squatters who settled on the Guyana Sugar Corporation (GuySuCo)-owned lands at Success told Stabroek News that they were unsure why the police fired at them when they had done nothing, although some have indicated that there was a confrontation between one of the GuySuCo guards and a squatter, which led to the firing of pellets to deter the squatters.

Some persons have said they were injured and were leaving the area to seek treatment, while others said they would not be retuning. Some who maintain they have no other place to go have said they will remain on the land, which has been flooded in recent days.

Two weeks ago the police fired pellets and teargas at the squatters as GuySuCo made an attempt to get them to remove from the land. There was a claim then that the squatters where being “aggressive” and “hostile” during the confrontation, hence the use of force.

Some squatters told this newspaper that they believe the move to take back the land has been  prompted by the burning of the cane fields in the area. They said that they think that the move to remove persons from the land because the cane was burnt should affect all the other persons who are squatting in other areas since “they want land to plant cane”.

By use of a large pump, the company has started the process of flooding the land. On Wednesday when this newspaper visited the site, the water was beginning to inundate the homes which were on low-lying plots and those which were slightly above the ground. Higher houses were not touched by the water but materials purchased were washed away or soaked. However, there was some relief for the squatters yesterday when the pump experienced mechanical difficulties and the water which they feared would continue to rise started receding. But they explained that prior to that the water had quickly moved along the paths dug by the excavators. One man yesterday said that the water had moved from just near the trench which is connected to a dam and had gone further inward, meaning that the water would soon completely flood the area.

The squatters were asked why they haven’t vacated since the flooding doesn’t seem like it will stop and they responded that they settled in the area after assurances by government officials, including the Minister of Housing and Water Collin Croal and the Region Four Chairman, Daniel Seeram. The squatters have also claimed that rallies held by the People’s Progressive Party/Civic saw other officials make promises that lots would be allocated and that the squatting area would be gifted to them. Other squatters have said that they were told that they would be given lots if they develop the area. And although two weeks ago GuySuCo informed the squatters that they needed to vacate, the squatters say they were not given proper notice. Officials had also said that trucks would be provided to help the squatters to move but none was provided and instead the squatters were visited by an excavator.

Some persons continued to complain that young children, elderly and sickly persons reside there and the treatment is unfair and uncalled for.

Persons living at Success said that with the water rising they fear that dangerous reptiles can be drawn to the area.