The Sasha Cells National Senior and Junior Chess championship got underway last weekend with a major upset highlighting the first three rounds of action at the Windjammer Hotel, Kitty. 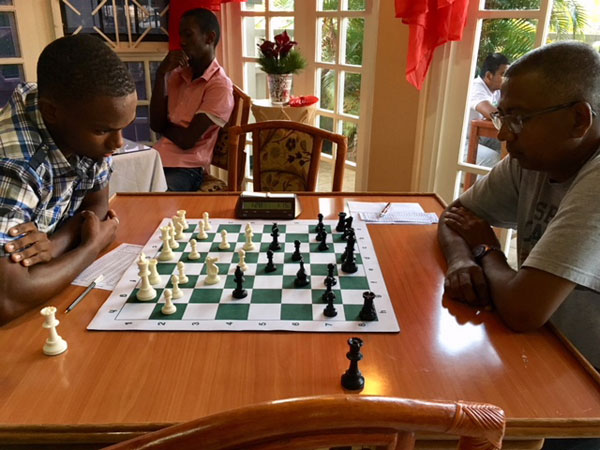 In the senior category, Loris Nathoo pulled off a major heist, toppling one of the favourites,Candidate Master Anthony Drayton, in their head-to-head showdown. Drayton has a FIDE ranking of 1945, the second highest by a Guyanese behind Wendell Meusa’s 1967.
Based on those numbers, Drayton entered the clash with Nathoo as overwhelming favourite. However, Nathoo, with a FIDE ranking of 1669, took matters into his own hands and dropped Drayton, whose tournament has not been going according to plan thus far.
Drayton was held to a draw against Meusa, and has recorded his only win after three rounds against Glenford Corlette in the opening round.
After three rounds, former champion Taffin Khan is leading the points standing with 2.5 points, earned from two wins and a draw. Meusa, Nathoo and Ronuel Greenidge are stacked on two points apiece, followed by Drayton on 1.5.
Saeed Anwar Ali has a solitary point, while Corlette and Maria Varona Thomas occupy the cellar position with half a point each.
The junior tournament is sizing up to be a very competitive showdown for the title with two players locked at the top of the table. Table-toppers Joshua Gopaul and Ghansham Allijohn have so far accumulated 2.5 points each, with two wins apiece and their head-to-head clash producing a draw in round three.
Jaden Taylor, Roshawn Washington and Ethan Lee are in a battle on two points each, while Nellisha Johnson has one point thus far. Dwayne Bess and Sasha Shariff are languishing at the bottom of the table, both yet to score.
The competition will wrap up this weekend with action in both categories at the National Resource Centre, Woolford Avenue, Georgetown.
Guyana Chess Federation executive member, Irshad Mohamed, said another intense two days of chess rivalry is anticipated as the battle for the prestigious titles of Junior and Senior chess champions of Guyana for 2018 continues.
Mohamed also noted that should there be a tie at the top of the table, a tie-breaker with the players in question would be held on Monday (March 19).