Yesterday, protesters marched peacefully in front of the closed gates of Marriot Hotel site, Kingston, demanding Guyanese constitutional rights to be employed in the construction of the hotel that is being funded by Guyanese taxpayers.
A sense of patriotism filled the atmosphere as the over 50 demonstrators including politicians, trade unionists and social activists held placards reading: “Stop insulting Guyanese”, “Warning…Our Government is selling us out to China”, “We will not be second class citizens in our own country” and “Ramotar insulting Guyanese”. 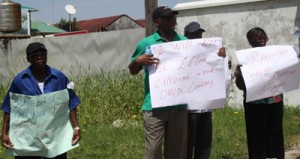 Former President, Bharrat Jagdeo, who paved the way for the controversial project and saw its commencement in November 2011, was criticized and accused of being a “traitor who sold out his own people”.
Shanghai Construction Group began works several months ago but only recently it became public that no Guyanese labourers were employed with the project.

Government is urging local businesses to help themselves by building capacity and actively seeking partnerships with international businesses on their own.
This is according to Finance Minister Winston Jordan, who, in his closing address on the budget 2018 debates on Friday, said firms want something out of partnerships, and as such, would not simply partner with local businesses.
“We don’t have the technology, finances, capacity. So how are we going to compete with these (international companies)?” a vehement Finance Minister asked. “All this talk about legislation, legislation, legislation…We have to creep before we walk!”

“If Chinese firms are coming and winning bids, what can we do? These firms are bringing a level of technology that we don’t have. A typical example is the Marriott. At what stage would the Marriott have been if it was built by a local company?”he asked  https://guyanatimesgy.com/guya...p-themselves-jordan/