'Having this in our arms, it's priceless': B.C.'s new year's baby a miracle for couple who lost first child 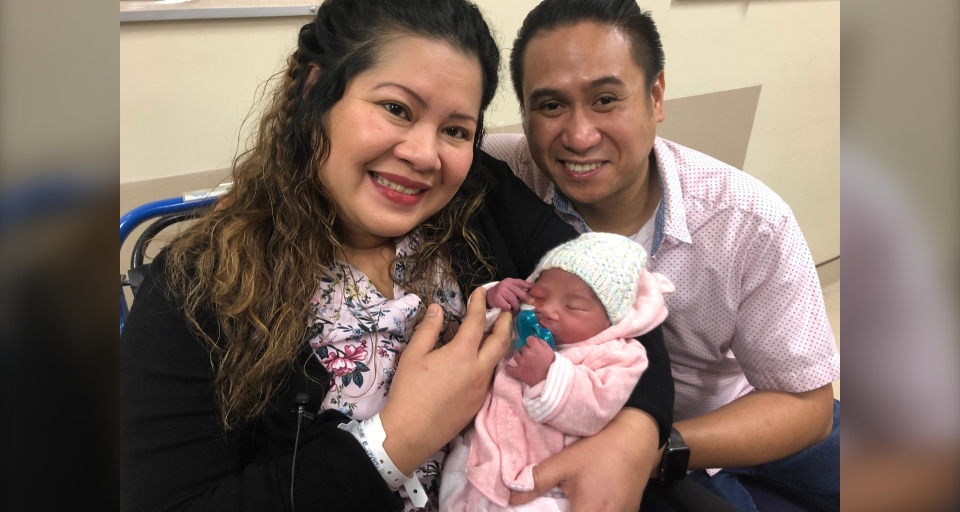 The first baby of 2020 was born at the New Westminster hospital to parents Claire and Jhamel Tabuada.

VANCOUVER -- When Coquitlam couple Claire and Jhamel Tabuada learned they were pregnant for the second time, they didn't tell their extended family in the Philippines.

"We kept it quiet because of what happened last time," said Claire. The couple's son was stillborn at 37 weeks in August 2017.

"This family, your heart just had to go out to them," said Dr. Kathy Jones.

The Tabuadas were admitted to Royal Columbian Hospital New Year's eve when Claire's water broke, two weeks before a scheduled C-section. After what happened last time, they were understandably nervous at the thought of an early, emergency delivery.

"My husband, he was panicking. He didn't know what to do. He was running here and there," said Claire. Having the new year's baby didn't cross her mind as she was wheeled into the delivery room. But doctors knew.

"We are definitely aware because it is extra exciting," Jones said. "I've been lucky enough over my long career to have helped with new year's babies in the past, but not for a long time."

As the clock ticked closer to midnight, Jones knew it was possible.

"I think the surgery started at 23:55 p.m. I glanced at the clock in the room and thought it's hard to know how this one's going to go," she said.

"It was a little tricky getting the head out, and then she was delivered and I glanced at clock and it looked like it was three minutes past midnight. I thought, isn't that great! We're all saying happy new year, but it turns out a nurse took a photo at the time, and it was one minute past midnight."

"We're happy and excited," said new father Jhamel. "I don't mind being early as long as the baby's healthy."

Claire says family members who didn't even know they were expecting are absolutely shocked.

But the birth is bitter sweet, bringing back memories of losing their son two and a half years ago. They decided to try again, and although they weren’t quite prepared for their daughter's early arrival, they say the as yet unnamed baby girl is the best gift they could ever receive.

"Having this in our arms its priceless, very priceless," said Claire.