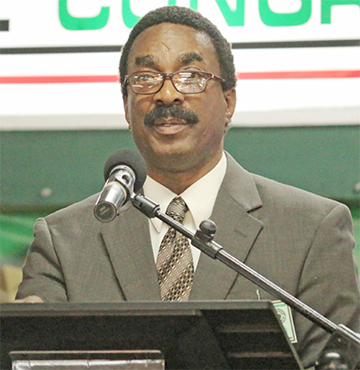 An attempt by Attorney General Basil Williams to warn of possible post elections violence has been labelled a threat by the opposition People’s Progressive Party/Civic (PPP/C).

According to a statement yesterday from the party, Williams, during a panel discussion organised by the American Chambers in Guyana at the Marriott Hotel on Tuesday, threatened “dire consequences” if  house-to-house registration is not allowed to proceed, fallaciously insisted that house-to-house registration is the only means of obtaining a credible Voters’ List and disingenuously ignored the constitutional three-month deadline for Elections to be held in Guyana.

The statement quoted Williams as stating that “they are willing to go to the Election with an anyhow list. They are ready for their properties, and all these things, to be subjected to those same post-election type of violence that we had in the past. I don’t want to say well y’all go, go to the Election, because the consequences would be dire.”

The quote provided excludes more than five minutes of content between the penultimate and last sentences.

In his response to a question posed by Private Sector representative Kit Nascimento, Williams had stressed that during elections in Guyana “tensions are exacerbated”.

He stated that the “act of treachery” by former parliamentarian Charrandass Persaud has primed and motived the bases.

“It might be difficult for us to calm them in a short space of time…Everybody is ready. The worst thing you could do is have them turn up to vote and their name not be on the list…is that what you want in this country? We always have to have in the back of our head how fragile our elections are… you know our deep seated issues. For the last elections we’ve been moving towards inclusivity. You had no violence in 2011, in 2015 or even 2006. We owe Guyanese another peaceful election. You think the coalition supporters are happy about the act of treachery which has truncated the five years of development they were promised?” Williams questioned.

He went on to stress that “Guyana needs a credible elections which we can only have with a credible list.  I don’t want to say well y’all go, go to the Election, because the consequences would be dire.”

According to the PPP/C this is not the first time that the Attorney General has descended to such talk since in May he warned about “unrest” that might follow in Guyana if the Caribbean Court of Justice (CCJ) rules against the Government in the three consolidated cases, related to the challenge to the validity of the no-confidence motion passed on December 21, 2018.

“The Party firmly believes that President David Granger is ultimately responsible for such reckless comments. It is clear that he opts to present a disposition that is above reproach while he dispatches his minions to engage in a campaign that does nothing, but harm to our nation,” the statement charged.

It goes on to argue that house-to-house registration as currently being executed will de-register countless Guyanese, imposing demands on eligible Guyanese that are unconstitutional and not be completed until February 2020.

Further according to the PPP/C if the process is allowed to continue there will be violence.

“There is already anger among Guyanese about the unconstitutional nature of the ongoing house-to-house registration and the refusal of the APNU+AFC Coalition to comply with the Constitution and the orders of the Caribbean Court of Justice. This anger could spill over into spontaneous and regrettable violence, if there is mass de-registration, as the current direction of the house-to-house registration indicates. This is an outcome that must be avoided by ensuring that there is constitutional compliance,” the statement reads.

The caretaker Coalition Government cannot continue to ignore the consequence of the successfully and validly passed no-confidence motion which is Elections by September 18, 2019, the party stressed, adding that the ongoing legal challenge to house-to-house registration is likely to end up before the CCJ.

“If house to-house registration is pursued and results in a flawed List of Voters, which it will, there can be an impact on any Election that is held. If an Election is held with a flawed List and the CCJ rules that house-to-house registration is unconstitutional, the Election could be invalidated,” the PPP argued before imploring GECOM to urgently pursue Claims and Objections as a tested method for updating the existing List of Voters to allow for Elections to be held within the constitutionally mandated three-month time frame.