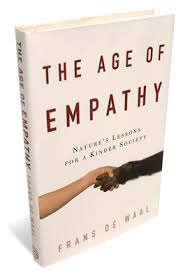 * In this thought-provoking book, the acclaimed author Frans De Waal
examines how empathy comes naturally to a great variety of animals, including humans.

* By studying social behaviors in animals, such as bonding, the herd instinct, the forming of trusting alliances, expressions of consolation, and conflict resolution, Frans de Waal demonstrates that animals–and humans–are "preprogrammed to reach out." He has found that chimpanzees care for mates that are wounded by leopards, elephants offer "reassuring rumbles" to youngsters in  distress, and dolphins support sick companions near the water's surface to prevent them from drowning. From day one humans have innate sensitivities to  faces, bodies, and voices; we've been designed to feel for one another.

* De Waal's theory runs counter to the assumption that humans are inherently  selfish, which can be seen in the fields of politics, law, and finance, and which seems to be evidenced by the current greed-driven stock market collapse.  But he cites the public's outrage at the U.S. government's lack of empathy in the wake of Hurricane Katrina as a significant shift in perspective–one that helped Barack Obama become elected and ushered in what may well become an Age of Empathy. Through a better understanding of empathy's survival value in evolution, de Waal suggests, we can work together toward a more just society based on a more generous and accurate view of human nature.