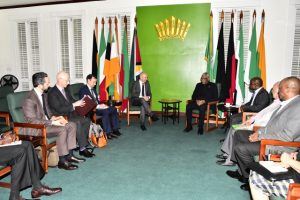 The United States (US) oil giant has agreed to help pay Guyana’s legal fees, amounting to just over US$15 million, for taking of the Guyana-Venezuela border controversy to the World Court, despite a denial earlier Thursday.

Other high-level government sources said  that the so-called $20M signing bonus from Exxon “is to assist with the border process as the UN Secretary General has promised to refer the case to the World Court in about four weeks time.

“Our national sovereignty is riding on this issue and it will be remiss of us if we are not prepared and all resources are not put in place. The actual amount is more than US$15M but less than US$20M. This is not the first time we are going this route as it was done with the CGX Energy and Suriname after the June 2000 incident with the Surinamese coastguard. The PPP was then in office. This is nothing new. This is not a signing bonus, but rather we are garnering the resources to prepare for the case. This is a sovereignty issue,” the officials said.

Finance Minister, Winston Jordan one week ago denied that government had raked in US$20 million from ExxonMobil as a signing bonus. Earlier Thursday, Minister of State Joseph Harmon said “in the event that the matter goes to the ICJ, the legal fees would be paid by the Government of Guyana. The Government of Guyana has responsibility for that. It’s a national sovereignty matter and it’s something we will have to pay for,” Harmon told a post-Cabinet news conference. Asked whether any of the oil companies would be contributing to the fees, the State Minister added that “this is a government responsibility.”

Saying that the situation is serious, Government also referred to the 2013 incident when the Venezuelan Navy had expelled a seismic vessel leased by Anadarko Oil of Texas and the fact that Venezuela still occupies the western half of Ankoko Island as has been the case since independence in 1966.

As well, back in 2015 shortly after Exxon had announced the massive oil and gas find, Venezuela had thought it best to redraw its map, taking in the Liza and other fields as well as the coastline of Guyana and some neighboring Caricom countries.