But why do the Haitians run and hide in black populated crime-ridden areas like Plaisance?

So why doesnt Jagdeo go to Plaisance and go find all 20,000 Haitians hiding there.

Tell you what.  Guyanese speak with a heavy "R" sound.  Haitians have an inability to pronounce "R".  So even assuming that these Haitians know English tell me how they can hide from Jagdeo who is busy hunting them down as greedily as a slave master hunts down escaped slaves.

Given that Guyanese like to run their mouths can you describe how 20,000 Haitians are hiding?  How are they earning a living?  When do they shop and where?   Let me help you.  All of this is in Cayenne French Guiana.

Guyana is indeed a gateway…. 99 % confirm return tickets but never showed up at CJIA -83 arrive yesterday; 94 more due today

There are more details emerging about the entry of Haitians into Guyana in the past seven months – all pointing to a well-coordinated scheme which involves key stakeholders at the Cheddi Jagan International Airport (CJIA). 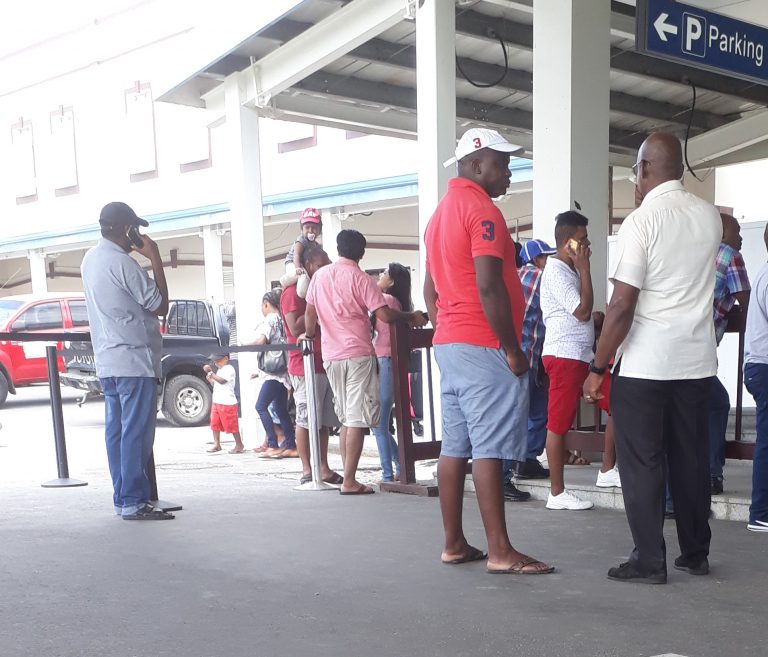 The man wearing the jersey with the number 3 on the sleeve threatened a senior reporter of Kaieteur News because of the coverage on the Haitians.

In recent days, based on complaints, it was discovered that in the last seven months, more than 8,600 Haitians arrived in Guyana via Timehri airport, the country’s main entry point.
During the same period, shockingly, only 13 went back.
It is now being discovered that during the period, as part of the requirements, the Haitians are supposed to enter Guyana with return tickets to their home country. However, while many of them confirmed to return on flights, they were no-shows for the Copa Airlines desks at CJIA when it came to time to check in. It would suggest a deliberate attempt to fool the country’s systems, with implications for national security as well.
In fact, for this week alone, just two persons went back.
On Thursday, 25th July, 18 persons confirmed intentions to return home. On the Copa flight, no one turned up. The next day, 78 persons were scheduled. Only one person went back.
On Tuesday, 30th July, 87 Haitians who came to Guyana booked to return home – one went back.
There was none leaving yesterday.
However, 83 Haitians entered Guyana yesterday. No one booked to leave.
At the airport, reporters saw the persons had different minibuses to pick up the passengers. There were also a number of different persons who were dealing with the arriving passengers, which again included women and children. 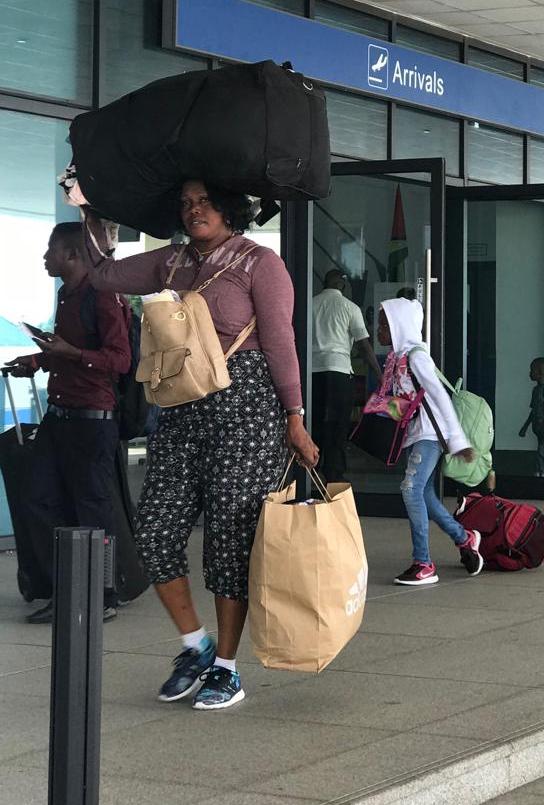 Haitians arriving yesterday and being escorted to waiting minibuses. 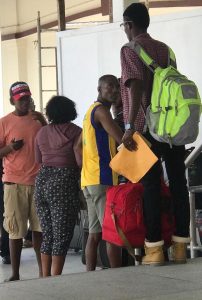 Haitians arriving yesterday and being escorted to waiting minibuses.

Yesterday, the persons were on high alert. From the police, to Immigration Officers, and taxi drivers, there was anger that attention was brought on the arrivals of the Haitians.
“Is a hustle we deh pon. Why people trying to shock we out? You gon give we money or wuk now?” a taxi driver asked. He refused to explain where the Haitians were going or why so many were coming in.
Yesterday, at the airport, the reporters were questioned about their presence.
One man, dressed in a red jersey and cap with the number 3 on them, and believed to be a bus driver, threatened a Kaieteur News senior reporter.
“There is nothing wrong going on here. You will look up one day and I will be right there,” he vowed as he walked away – a clear threat.
A police officer, who seemed not concerned with the scores of Haitians who were coming in under questionable circumstances, was more troubled about the photos being taken by reporters of Kaieteur News.
“Sir, I have received a report that you are taking photos of these men,” he told one reporter.
He was asked to explain what sections of the laws were being broken. He was one of the same policemen who was there on Tuesday when more than 40 Haitians entered Guyana, around 2pm via a Copa Airlines flight.
The issue has been rearing its ugly head in recent months.
Since January, more than 8,600 Haitians came to Guyana. That is no big deal, except that, as has been detailed, only 13 went back over the same period.
Minister with responsibility of Citizenship, Winston Felix, believes that the Haitians are using Guyana as a stepping-stone to other countries, including Brazil, Suriname and French Guiana.
Earlier this year, based a resolution of CARICOM, member states including Guyana relaxed their stance on Haiti, making it easier for skilled nationals and other professionals to enter and stay up to six months.
Haiti has been ravaged with hurricanes and earthquakes leaving the country in need of an international response.
However, since January, thousands of them have arrived here.
The Opposition has been accusing Government of bringing in Haitians and registering them in time for early general elections, which is due in months.
The Opposition Leader, Bharrat Jagdeo, this week called for an investigation of the Immigration Department over the issue.
Guyana is facing early elections after a shock no-confidence motion by the Opposition against the four-year-old Coalition Government was carried. Issues like the Haitian arrivals have been especially burning ones for the Opposition, which lost their 2015 elections after 23 years in power.