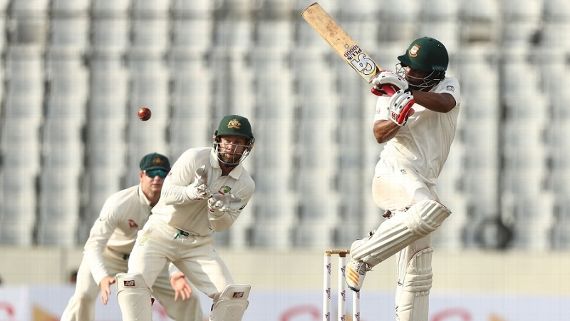 Tamim Iqbal flicks one into the leg side Getty Images

Maxwell made a confident 23 before he was lured out of his crease by Shakib, who turned the ball past the outside edge and Mushfiqur Rahim completed the stumping. Shakib might have had Agar stumped as well, but some exaggerated bounce off the pitch tricked Mushfiqur as it did the batsman. Another opportunity went begging when Cummins skied one towards cover off Shakib on 11 and Shafiul Islam dropped a straightforward chance.

Cummins and Agar took those reprieves and used them to bat together for 25.2 overs, displaying impressive patience and technique that some of their top-order colleagues might learn from. For a while, it even looked like they might lift Australia close to Bangladesh's total of 260. But on 25 from 89 balls, Cummins tried to drive Shakib through the off side and was bowled; Agar finished unbeaten on 41 off 97 when Josh Hazlewood was taken at short leg off Shakib for 5.

Australia were not the only ones struggling: umpire Aleem Dar had two poor decisions overturned on review, first when he gave Renshaw lbw off a Mehidy delivery that would have sailed well over the top of the stumps, and then when he adjudged Cummins caught behind down leg off Shafiul Islam, when all the ball had touched was thigh pad. Both times, Dar self-admonished with face-palms. Australia, all out for 217, might have collectively done the same.