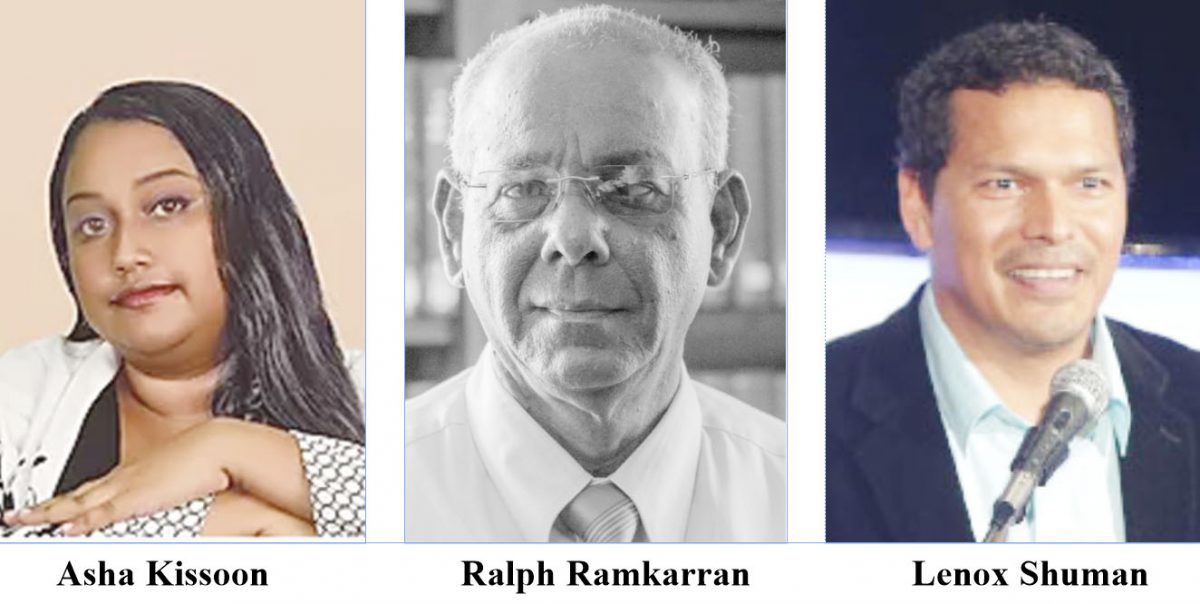 In a historic move, A New and United Guyana (ANUG), the Liberty and Justice Party (LJP) and The New Movement (TNM) have agreed to join their Lists of Candidates so that the votes they secure at the March 2 general and regional elections could be counted collectively and improve their chances of securing parliamentary and regional seats.

The parties will contest the polls separately but in tabulating votes for the allocation of seats in the National Assembly and on the Regional Democratic Councils, their votes will be combined. “Any party getting 2,000 votes does not get a seat so that’s a waste of those votes but a combination list with 6,000 votes has won a seat and more importantly has prevented either APNU+AFC or the PPP/C from winning that seat,” a source close to the process explained to Stabroek News yesterday.

ANUG led by Ralph Ramkarran, the LJP led by Lenox Shuman and TNM led by Asha Kissoon have informed Chief Election Officer Keith Lowenfield that they wish to engage in a “joinder of lists.”

The three parties are expected to announce this decision today at a press conference scheduled for 10am at the Georgetown Cricket Club (GCC), Bourda.

While none of the party leaders would identify the other members of the collective, a source close to the process explained to Stabroek News that the decision to join was a tactical attempt to prevent either of the larger parties from gaining a “remainder seat.”

According to Section 22 of the Representation of the People’s Act, two or more lists of candidates shall be joined for the distribution of seats (but not for the purpose of voting) if the representative and deputy representative of each list to be so joined gives notice accordingly in writing to the Chief Election Officer not later than the 25th day before election day.  It adds that lists so joined are to be referred to collectively as a combination of lists. ANUG has previously announced a collaboration with the Federal United Party (FED-UP) but on Nomination Day, the proposed coalition collapsed mere “hours” after it was finalised.

As a result FED-UP will not be contesting the general election and will only appear on the Regional Ballot in Regions Five and Six.   The Guyana Elections Commission (GECOM) has approved the lists of 11 parties, including ANUG, LJP and TNM, to contest the March 2 polls.

Every candidate for election is required to declare themselves eligible to sit as Members of the National Assembly and Stabroek News had previously reported that GECOM is considering how to deal with Shuman, who signed the declaration after submitting the requisite documents to renounce his Canadian citizenship but whom it appears has not yet received confirmation of same.

Article 155(a) of the Constitution specifically disqualifies from election to the Assembly a person who by virtue of his own act is under any acknowledgement of allegiance, obedience or adherence to a foreign power or state.